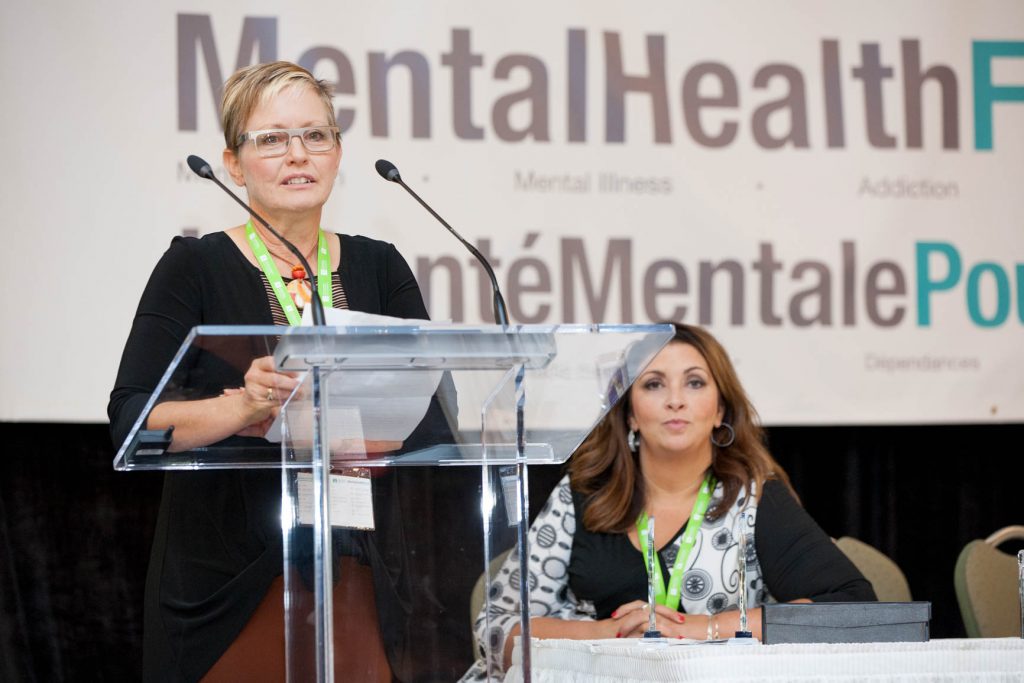 As the nationwide leader for mental health, CMHA recognizes inspirational leadership, innovation and excellence in maintaining and improving mental health for all. The Strengthening CMHA Award is presented in recognition of CMHA’s history, and to increase solidarity among its community locations.  The award is presented to a region, branch, division or national level or an individual who has provided inspirational leadership, innovation and excellence within CMHA related to our collective goals and core functions.

Meet Ruth Smith:
Executive Director of CMHA Swift Current Branch for the past nine years, Ruth Smith has played a pivotal role in building the branch, and ensuring its financial sustainability. Offering the best possible services to clients is at the core of Ruth’s leadership to CMHA Swift Current. She introduced a Clubhouse model into the Swift Current Centre, in which clubhouse members have an executive that holds member meetings and solicits ideas about how the Centre can better meet members’ needs. Ruth’s effort and passion will be greatly missed in the community when she retires at the end of December.

Meet Marion Cooper:
Marion Cooper has over 20 years of experience in the field of mental health and addiction. She came to CMHA Winnipeg/Manitoba as Executive Director at the time of the amalgamation of the Winnipeg Branch and the Manitoba Division and led the way during this important time of transition, demonstrating tremendous leadership. She has an impressive record of providing support to persons with lived experience.

Meet Mark Gruchy:
Receiving the CMHA Consumer Involvement Award was Mark Gruchy, a lawyer from St. John’s, Newfoundland and Labrador. He served as President of CMHA-NL Division for six years, is now immediate past President. He also served as a member of the CMHA National Board of Directors. An inspirational spokesman for mental health issues, he is Co-Chair of the newly formed Community Coalition for Mental Health (CC4MH, the Coalition) which seeks a meaningful public policy response to the health challenges that affect the province of Newfoundland and Labrador. In consistently identifying as a person with a mental illness, Mark has made major advancements in the public perception of mental health conditions and has also been the catalyst for more people identifying publicly.